History of Knitting - A Resource Demystifying the Origins of Knitting 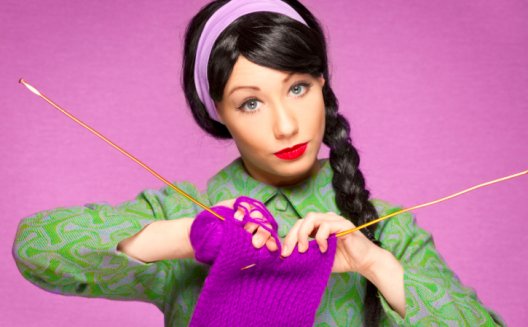 Knitting is the process of creating loops of threads that interlock row by row, through the use of yarn and needles. This craft has been used by many in creating fabrics and garments such as socks, sweaters, scarves, hats, and dresses. The earliest use of the word "knit" noted in the Oxford English Dictionary dates back to the 15th century. It originated from the Old English word cnyttan, which means to tie with a knot. However, this verb has several meanings in the modern English. They also use the term in defining the verbs to fuse or to draw together.

Knitting can be done alone or socially. It doesn’t require much space since you’ll only be needing a pair of needles and a yarn in creating your craft. Nowadays, it has been usually practiced as a form of therapeutic activity or a hobby. Numerous knitting circles and organizations like Makers Mercantile and Ravelry are being established to cater people with ardent passion and enthusiasm in this form of art.

The Puzzling Mystery of Knitting 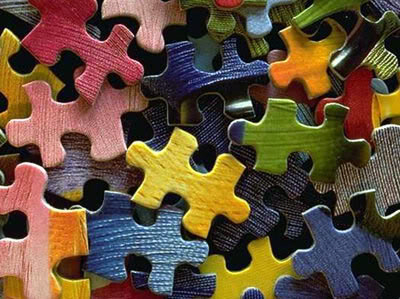 Photo from Keen For Green

The legendary origin of the art of knitting has still been a question to many. No one has ever known the exact date of when the first production of a knitted item occurred. However, knitting is said to originate in the Middle East, and is recognized as the youngest craft among spinning and weaving. The ancient knitted garments were made of natural fibers like cotton, wool, and silk. Such materials decompose easily, which made it even harder to trace the time when this activity existed. In this article, we’ve listed the history of knitting – from the ancient times to the present day. So before grabbing those yarns and needles, let’s first find out and explore more about the wonders and mysteries in the world of knitting.

The Historian Richard Rutt conservatively suggests that knitting originated in Egypt between 500 and 1200 A.D.. An independent researcher, Rudolf Pfister, discovered some fragments of knitted fabric in Eastern Syria. The pieces were made of purled and plain wool, and each fragment was believed to be a part of a foot sock. Some experts later argued over the Dura fragments, and have been proven to be a product of nålbinding. 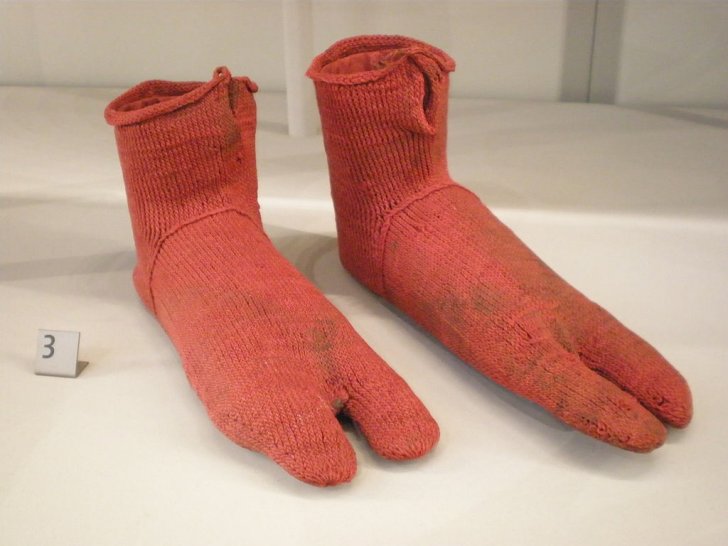 Photo of a pair of socks using Nailbinding from Wikipedia

Nalbinding is a knotless fabric creation technique that predates knitting. This type of activity uses a single needle to knot and merge fabrics together, whereas knitting uses a pair of needles and a yarn to make loops. It was practiced by the Coptic Christians in Egypt during the 4th century to create a pair of Coptic socks – a roughly shaped garment to fit the foot for thongs or sandals. It was also used by the Scandinavians who reside in cold, mountainous regions to produce extra-warm hats, gloves, and head garments in the latter half of the 1st century. Rutt strongly believes that the art of knitting might have been invented by the Egyptians to save time and energy in creating their garments. Compared to knitting, nalbinding consumes more time and requires special dexterity. However, this fabric produces a smoother, denser, and more durable fabric than knitting.

A genuine knitted piece has been found in Egypt, circa 1000-1400 A.D.. Created using white and indigo cotton, its complexity in design firmly indicates that this item is not the very first knitted item that has been produced. 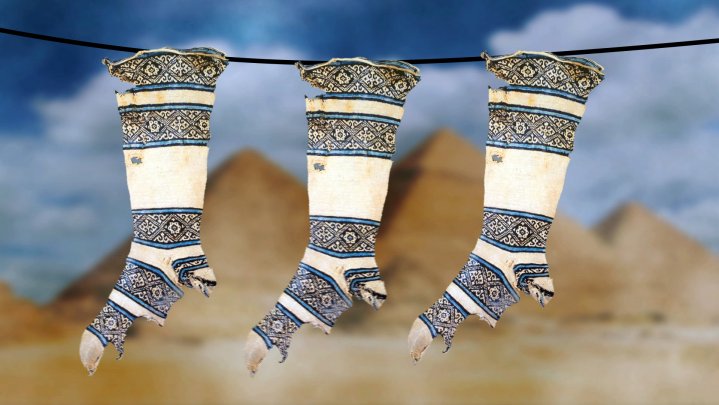 From the Arabs, the art of knitting was introduced in Spain. It was used by the Catholic church in creating their liturgical garments and accessories. Among the earliest knitted masterpieces were two Arab-knit silk pillows that was found in the royal tombs of a monastery in northern Spain, dated in the 11th century.

Several paintings were made in the 1350’s that portray Mary, the mother of Jesus, while she was knitting. It was called The Knitting Madonnas. One of these paintings is Madonna of Humility by Ambrogio Lorenzetti, showing Mary seated on the floor, knitting. Aside from letting the history know the existence of knitting in the 13th century, this also depicts the rise of knitting as a home activity for women. 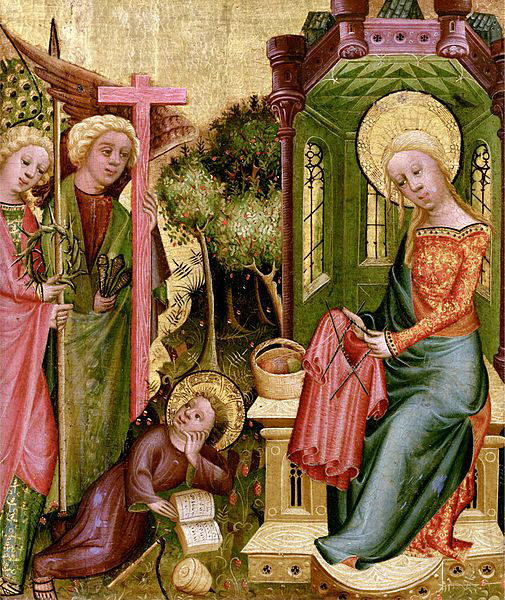 Photo of Madonna Knitting by Bertram of Minden from Wikipedia

During the 14th century, this activity eventually reached the rest of Europe. It became one of the works of the highly skilled craftsmen. Knitting guilds were established in France in 1268, and in order to gain membership, one must pass all the tests to be given to them. With the use of very fine yarns stitched with golden threads, these artisans have made gloves, pillows, and relic purses for the saints. They also knitted stockings, pouches, sleeves, girdles, and drawstring bags known as “pokes” (Nargi).

The 16th Century: Knitting in the United Kingdom

The purl stitch method was invented in the 16th century by the English knitters. It was used to knit stockings, a type of garment that was popularized as a powerful fashion trend for the Italian and Spanish men. King Henry VIII was the first British royalty to wear knitted stockings. It served as the blue jeans of today, establishing an elegant, fashionable look. Due to the high demand of this item, Queen Elizabeth I, the daughter of King Henry the VIII, encouraged the formation of knitting guilds. She also started using knit silk stockings and ornate knitted sleeves for her gowns during her reign.

Numerous distinctive styles in knitting also appeared in the British Isles. One of these is the cabling of a seaman’s knitted sweater called the Gansey. (To see how Ganseys are made, click here.) 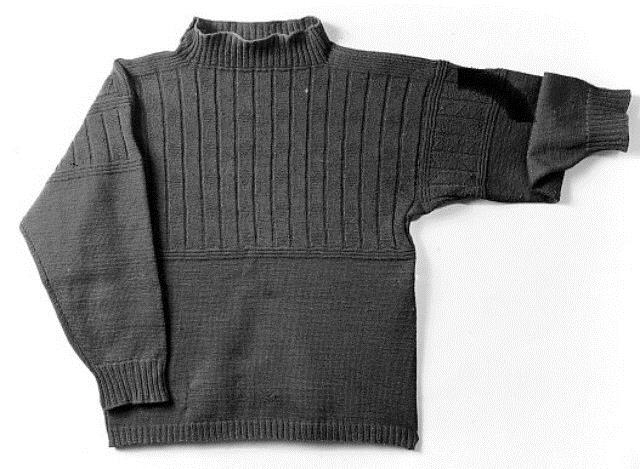 Photo of a Gansey from Maritime Heritage East UK

Another distinctive style is the Fair Isle knitting method, which first appeared in the Shetland Islands. The British Isles use this technique to create sweaters featuring two threads of different colors. The legendary past of Fair Isle occurred when Admiral Juan Gomez De Medina fled north in 1588. On the 17th of August that year, De Medina’s ship wrecked on the rocks of Fair Isle. He wintered in Shetland together with his people, and there they have taught the islanders the art of knitting. 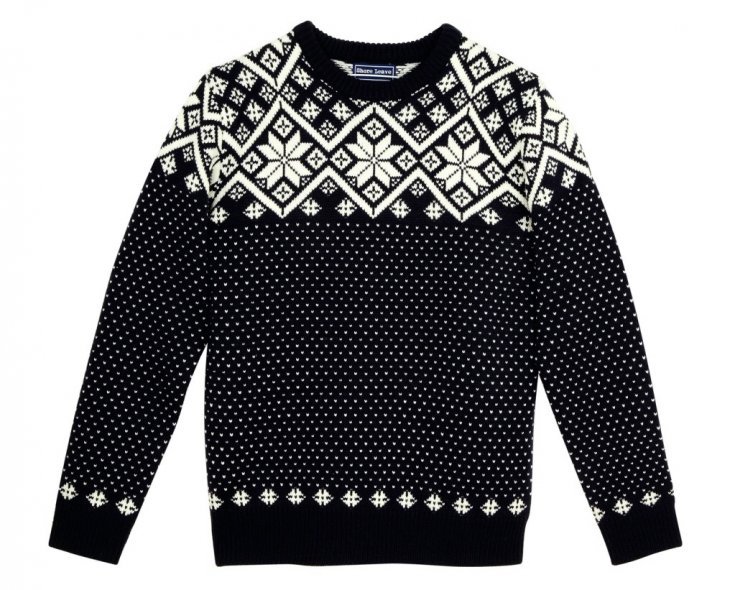 The Rise of Technology in the Art of Knitting

The world of knitting eventually developed and expanded as a trade. It was passed through nations by the European explorers and colonists during the industrial revolution. It was in 1589 that a machine for knitting was invented. The Englishman William Lee created the stocking frame or the knitting machine, the first ever device that imitates the hand movements of a knitter. It has 8 needles to the inch and only produces a coarse fabric. Later on, Lee improved the mechanism with 20 needles to the inch, and was able to knit stockings with silk and wool. 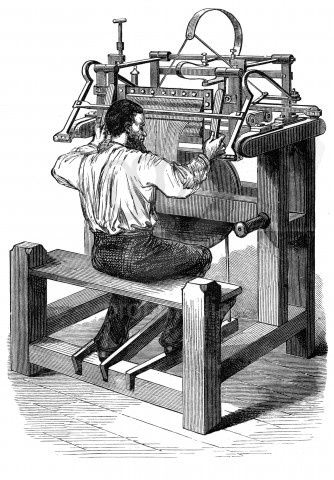 Photo of the First Ever Knitting Machine by British Inventor, William Lee

Several cities like the Nottingham became a major producer of machine-knitted fabrics. The land of Leicestershire and some of its neighboring countries also ventured in hosiery or the leg wear industry. With the growing number of demands in the market, the knitting machine manufacturers also increased not just in the production, but also in the development of the different types of machinery such as the circular knitting machine.

Knitting as a Voice for Nationalism 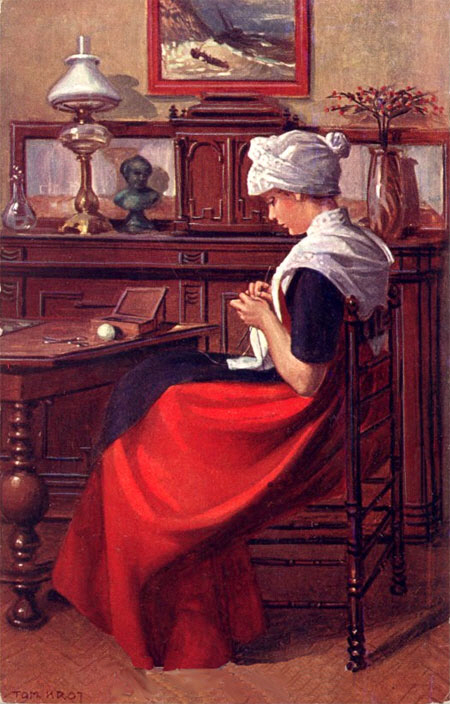 During the Revolutionary war, the young and old gathered together to sew and knit, as they show support for the patriots. The people knit their own garments to boycott British goods, showing their self-reliance and independence from the British. Martha Washington, George Washington’s wife, is also a dedicated knitter. She summoned the wives of the high-ranking officials in the colonial army to sew and mend garments such as socks and uniforms for the troops.

Knitting and its Road to Fashion

During the 1920’s, knitwears such as sweaters and pullovers played an essential role in the world of fashion. It became a fashion statement for both men and women of all ages and had been associated with sports and leisure such as golf, tennis and cricket. Coco Chanel also embraced this art, making a prominent use of such items and patterns. On the great depression, the prominence of knitting continued its journey, yet, changed its way as a means of necessity. Since it was much cheaper to make your own garments, people preferred producing their own rather than buying the commercial products. 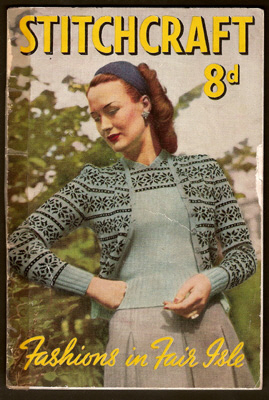 Photo from My Vintage Life UK

The synthetic yarn and fibers were introduced in the 1950’s, making it easier for the mass to produce their knits. Handmade knitting became a means of a hobby as the knitting machines became rampant in the market, producing ready-to-wear items and garments at a faster speed. Mini skirts, sweaters, and dresses made of fibers rocketed its popularity a decade after.

With the advancement of technology, some computer programs provided more convenience to knitters. The use of social media also played a special part in commercializing this craft. The internet allows us to connect and share interests with the other knitters around the world through the use of some knitting circle sites. Instructional videos and podcasts are also available, providing convenience to those who are enthusiastic to learn about this form of art. 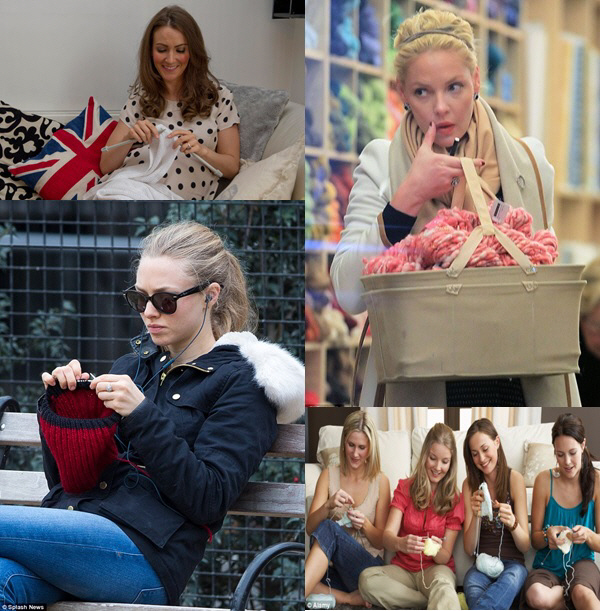 Even celebrities like Julia Roberts, Dakota Fanning, Cameron Diaz, and Kate Middleton have been seen doing this activity and popularizing hand knitting. Fibers like alpaca, angora, merino, cotton, plant, silk, bamboo, and yak became even more accessible and less expensive nowadays. Same goes with the variety of needles being offered in the market. Different styles and techniques in knitting were also implemented, which produce fascinating results and a wonderful experience in the world of arts and craft!